The Uncertain Legal Future of Boeing 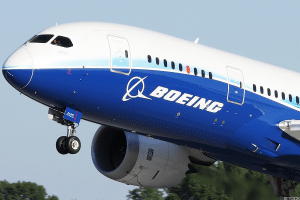 Boeing is the world’s largest aerospace company that leads in the manufacture of commercial airplanes.[1] With its corporate offices in Chicago,[2] Boeing is America’s biggest manufacturing exporter.[3] Originally called Pacific Aero Products Company, the Boeing Company was founded by William Edward Boeing on July 15th, 1916.[4] Back then, the company’s focus was developing an aircraft for both military and mail delivery purposes.

In the last year, less than five months apart, Boeing’s 737 Max was involved in two fatal plane crashes killing all crew and passengers onboard. The first of the two accidents involved Lion Air Flight 610, which took off from Indonesia on October 29, 2018 and crashed in the Java Sea only twelve minutes later. The second accident involved Ethiopian Airlines Flight 302, which took off from Ethiopia and crashed near the town of Bishoftu around six minutes after takeoff. After reviewing crash data it has been determined that the cause of both incidents might have been the same issue.

So what exactly caused both of these planes to crash so shortly after taking off? The answer is the 737 Max’s Maneuvering Characteristics Augmentation System or M.C.A.S. for short.[13] This system is an anti-stall measure. An aircraft stalls when its angle of attack (front of the plane) is too high causing the plane to lose lift.[14] When a plane loses too much lift it will fall out of the sky. Even though this system was the cause of both crashes, it was not malfunctioning. The issue in both crashes was that one of the angle of attack sensors located on the front of the plane gave an incorrect reading.[15] The sensor was detecting that the plane’s nose was too high even though it was not.[16] This reading triggered the rear M.C.A.S. forcing the plane’s nose down.[17] The pilots in both instances unknowingly fought against this system and tried to manually pull the nose of the plane up, but the M.C.A.S. is programmed to override manual inputs at ten second intervals. This led to the commercial airliners going up and down until they eventually crashed.

Looking to the future, these crashes will result in lawsuits. Each of these lawsuits will likely come from three different groups of individuals: employees of Boeing, commercial airline companies, and the families of those who lost their lives. The first of the three types of lawsuits Boeing will face will be in the form of loss of 401k benefits—these suits will come from employees of Boeing. Claimants claim that insiders knew of problems with the 737 Max series, but failed to take action which resulted in major losses to retirement savings in the form of $65 drop in stock price following the crash.[18] The second type of lawsuit will come in the form lost revenue lawsuits from commercial airliners. This is because after the second crash many countries including the U.S. decided to ground the aircraft nationwide. With fifty to seventy-five aircraft delivered in 2017 and more than five hundred delivered in 2018, many airline companies will be forced to switch aircrafts, change routes, or cancel fares altogether. These companies likely will pass this cost onto Boeing in the form of lawsuits.[19] The final type of lawsuit likely will come in the form of negligence suits from the families. The families of the victim likely will argue that Boeing was on notice after the initial crash, but did nothing to fix the harm.[20]

As of March 12, 2019, Boeing remained adamant the Max series was safe,[21] but after parts of the reports from the second crash were published Boeing announced it would take any and all needed safety measures regarding the 737 Max.[22]

[14] Sarina Houstin, Aircraft Stall and How to Prevent It, The Balance Careers (February 5, 2019), https://www.thebalancecareers.com/what-is-an-aircraft-stall-282603.